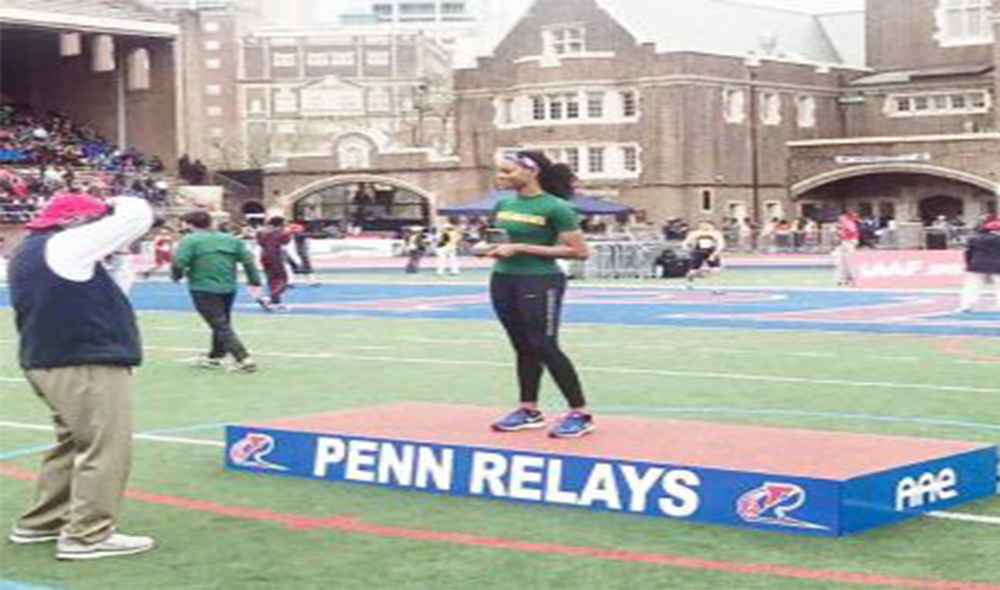 Guyana had their best performance ever at the just concluded 2018 Penn Relays in the United States of America with Natricia Hooper coming out victorious in the women’s triple jump event at the games.

Natricia Hooper on the Podium at the Penn Relays event.

With a leap of 13.34m, Hooper, fresh off her 9th place finish at the XXI Commonwealth games earlier in the month, ensured that Guyana’s name goes down in the record books.
Along with Troy Doris who won the Commonwealth Championship men’s triple jump, the King Medas Pansy Adonis (KMPA) Foundation would like to congratulate these athletes for their wonderful achievement. On the other hand the KMPA foundation is asking the relevant authorities to not let these two athletes disappear off the radar as has become a custom in Guyana.
The KMPA was reliably informed that Doris would like to come to Guyana to host a few coaching clinics with young up and coming athletes, something the foundation thinks could be of great asset to the development of athletics in the ‘Land of Many Waters’ and its calling on all stakeholders, including the Private Sector to come onboard and make this clinic a reality.
There were several promising performances from the Guyanese athletes and the KMPA foundation is overwhelmingly happy about them and it’s also hoping that lessons learned from this experience will open the flood gate for better performances to come.
Even though the KMPA played no part in organizing any team for the Penn Relays the foundation was well represented at the event.
The foundation is pleading that come 2019, more schools from Guyana including the University of Guyana participate in this event so that our athletes can get more exposure and confidence along with the drive to become better. The KMPA foundation would like to congratulate all who took part and to all the people who would have organized the different teams that participated at the 2018 Penn Relays.
The Penn Relays is the oldest and largest track and field competition in the United States, hosted annually since April 21, 1895 by the University of Pennsylvania which regularly attracts more than 15,000 participants from high schools, colleges, and track clubs throughout North America and abroad, competing in more than 300 events over five days.