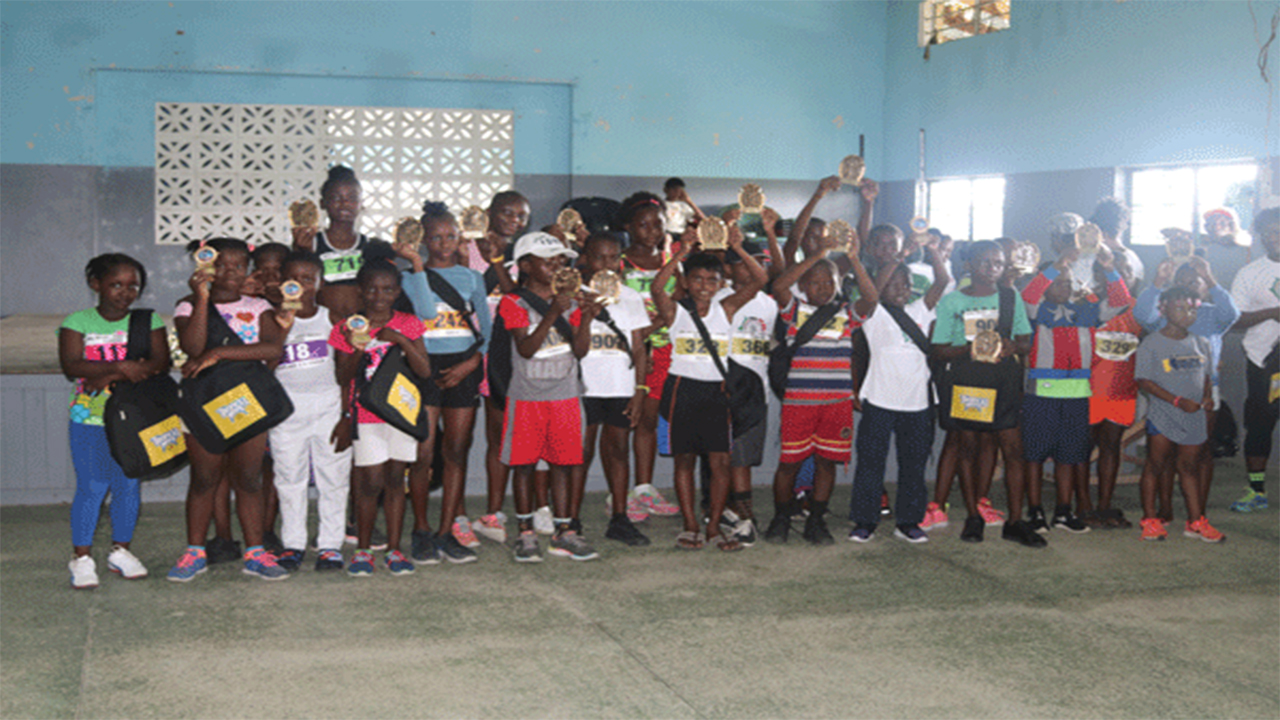 The 2018 King Medas Pansy Adonis (KMPA) Classic road race and Junior Olympic Games concluded on Sunday, September 23rd at the Lusignan Community Centre ground with Cleveland ‘Little Kenyan’ Forde copping the coveted feature 5k race.
Following Forde was Cleveland Thomas in second and Winston Thomas, who would later exact revenge on the two after winning the COURTS 10k a week later, in third place.
According to an organiser of the event, Medas-King, this year was the eight edition of the KMPA road race and the second junior Olympic games and it was a huge success. Some setbacks included the proper marking of the venue due to unfavourable weather but everything ran off smoothly in the end.
Running Brave track club won the girls’ 13-16 4x100m along with the girls’ and boys’ 17-20 4×400 relays. Police Progressive Youth Club (PPYC) emerged as the fastest boys in Guyana after winning the 4x100m relay.
Lamar Doris and Akela Dover emerged as the fastest boy and girl respectively, in Guyana, after winning respective under-8 division 100m races.
The KMPA classic and junior Olympic games saw over $4million in cash and prizes being doled out with athletes being awarded from first to 10th places in the senior male and female, masters male and female, male and female under-20, teachers male and female and government officials categories.

The organizers were in high praise for coach Christopher Gaskin along with the staff from KMPA foundation, Lorraine Adams, Junior Cornette, Shaquille Adonis and the rest of guys who worked late every night to get the ground in shape. The Foundation would like to thank the staff at Lenora Ground and also the Lusignan community centre ground for the role they played in this event not forgetting Rhonda Munize, Nicholas Fraser, Christopher Jones and all the teachers and officials who were working to develop the sport in Guyana. The camera crew was also outstanding and most of all the athletes and sponsors including Banks DIH who did such a wonderful job in ensuring all the kids got a backpack for school and making sure everyone was hydrated.
The KMPA foundation in a release noted that with the youngsters being exposed and rewarded for their efforts, next year will see sterner competition. There were challenges in getting the messages out to the different regions but that area will be dealt with in the coming months. Now that the entire games were recorded live and will be posted online soon, every athlete will be able to see themselves in slow motion and fast replay. The KMPA foundation would like to thank everyone for their support and help, the release concluded.
Among the sponsors of the event were Shelmac photos USA, Ansa Mcal, University of Guyana, Prodigal, Sybil’s Bakery Queens, Banks DIH, Daddy’s Enterprise, Star Party Rental, Payless Variety Store, NSC, Ministry of Education, Wake Up Guyana Show, Prince Shipping, Island Express and the Adonis Family.