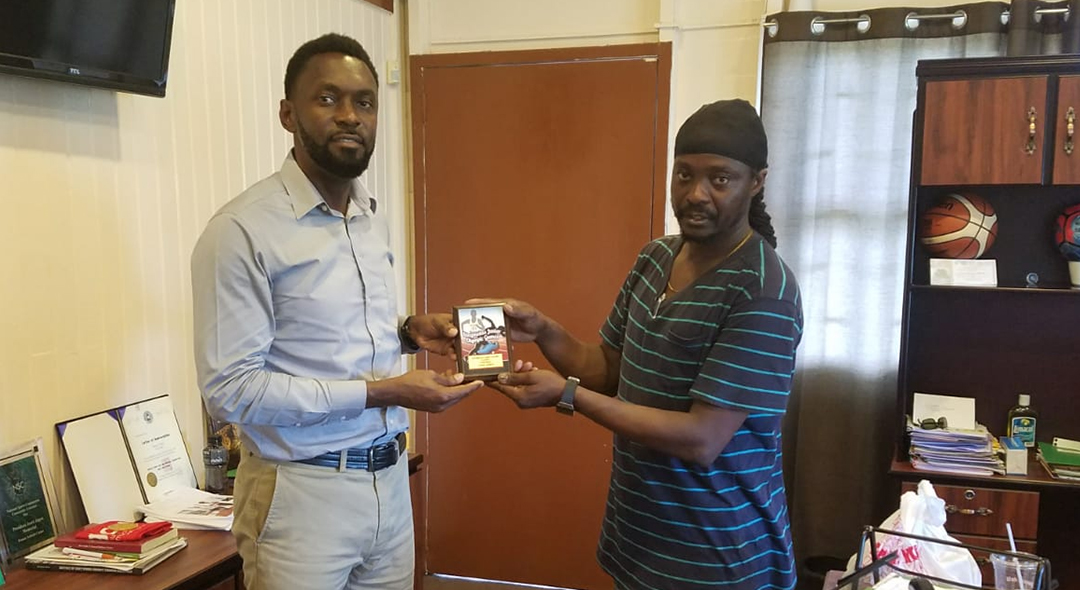 While in Guyana, the founder and organizer of the King-Medas Pansy Adonis classic and foundation, Andy Medas-King, made a few presentations. He presented Running shoes to a few athletes and coaches and also paid a visit to the National Sports Commission (NSC) office where he was able to present the commission with a plaque of appreciation for their Support towards the King-Medas Pansy Adonis classic road race and track meet; Guyana’s Junior Olympic games which is planned for the 20th to 23rd of September at the Lusignan Community Center Ground.
While in Guyana, Medas-King also noted that with the permission of the school, he was able to present a long jump pit at Annandale Secondary; the second long jump pit donated by the organisation, the first being dug at Buxton community center ground on the East coast of Demerara.
The organiser also noted that construction has begun at President’s College for an all weather run up to their long jump pit. Medas-King also provided shot put, turbo-javelin and discus to a few coaches so that they can train and recruit new athletes in the field events with the vision of seeing a long jump pit, discuss and shot put area in almost every school starting with the upper East Coast, but everything comes with a cost.
To construct the long jump pit run up carried a cost of $300,000 which include materials and labour cost but the foundation bore most of the expense.
To assist the cause, the foundation has noted that they don’t need the cash but businesses can donate the sand, cement, transportation and steel to offset the expense. The foundation is of the view that once the schools have these equipment we will produce world class athletes.
Medas-King noted in a media correspondence that anyone who wants to see the work the foundation have done can visit http://www.kmpasport.Org.
Athletes are also encouraged to begin registering for the Road Race and Junior Olympic games which the cost of $1,000 by clicking the donation icon on the website or persons can contact Lorriann Adams at Ch. 2 safe TV studio in South Ruimveldt Gardens.